Yesterday I gave a talk on mobile A/B testing at the Silicon Valley iOS Developers meetup at Yahoo HQ.

I demoed the composition and testing of a test that would show a minimalist signup page 50% of the time, and a fancy one the other 50%. Then we inserted Mixpanel conversion events that would track the success of each respective group.

I used Skylab to present the tests to users, and Mixpanel for funnel analytics.

I'd also recommend using Ground Control to enable and disable the tests remotely.

A/B Testing is your chance to try crazy new things on a limited but targeted scale. HT @BrianSoule for examples at #SViOS.

"'One Odd Trick To Lose Belly Fat' was probably ad copy written for an A/B Test, and obviously did well." - @BrianSoule #SViOS

To those that first used facebook as a college network,

You may have noticed more and more websites using facebook as a primary login method. Not only is it a quicker login process, but the use of facebook identities cuts down on spam and trolling. Facebook, and the web is changing.

As facebook moves toward hosting the entire internet upon it's social graph, and as your data is accessed by applications on a daily basis, it's days as a private, intimate, network used to share drinking pictures and inside jokes is coming to an end. This is not necessarily good or bad, it's just different.

For those recent grads that signed up with their college email, and posted obnoxious photos on Sunday afternoons, this is a change in mentality. Your facebook identity will become similar to the footer in your emails. It will become less controversial, and a little more business oriented,

Conversely, I believe the market is creating an opening for a more intimate, exclusive network. One that would be optimal at around ~30 of your closest friends. A network that adheres to the social gatherings and parties that your relationships are originally derived from.

Soule Mobile: It has been more than a year since I last updated the world on my current company. Soule Mobile builds great apps for businesses and investors. The product of great supporting talent, countless hours of programming, and old fashioned hard work, our goal is to join the Inc. 500 in style.

The decision to invest myself into mobile was both exciting, and inevitable. Data shows that smartphone growth is eclipsing that of internet era. Globally, many smartphone users have never owned a pc and are accessing the internet for the first time through their mobile phones.

I'll leave you with Mary Meeker of Morgan Stanley's report on the mobile web. 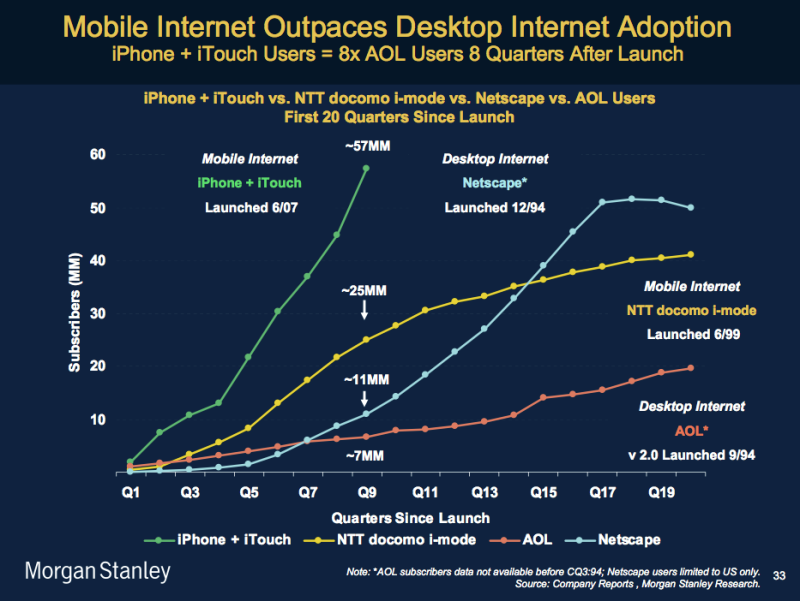 Mobile has been defined by its breathtaking rate of adoption. Within 5 years more web pages will be accessed on smartphones than on PCs. 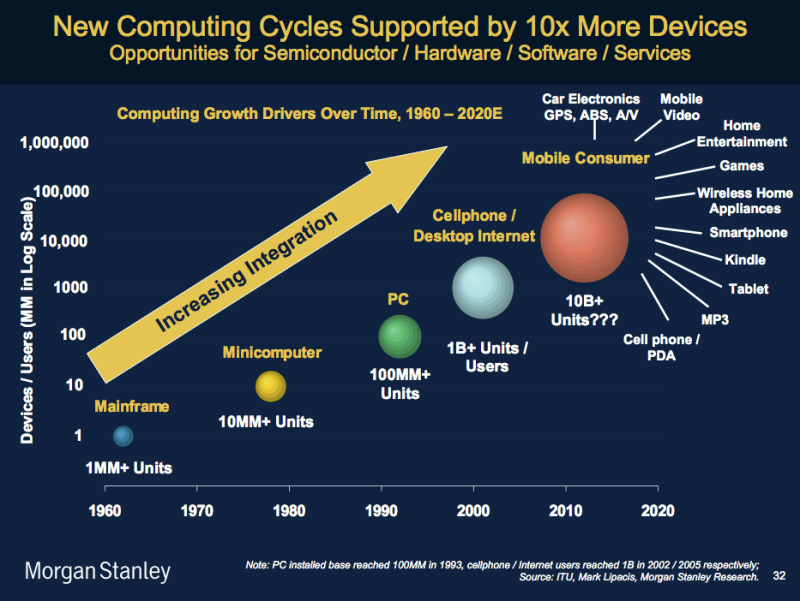 Mobile's growth is only shadowed by it's greater potential, the number of PCs are destined to be a fraction of that of smartphones; Portable, Realtime, and Location based services will change the way we live our lives. 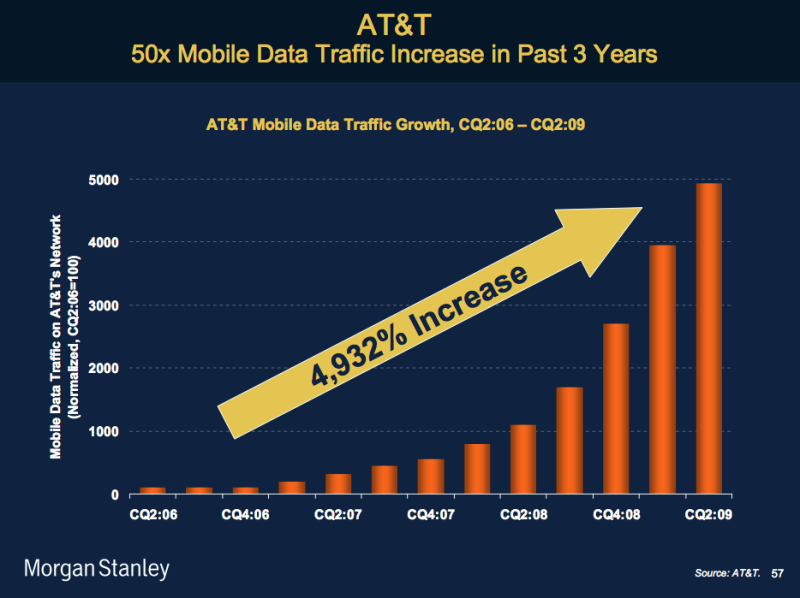 The extinction of Wi-Fi: With mobile bandwidth exploding, and 4G on the horizon, we will begin to forget the days when we sat around a router to access the internet.

The future is now. 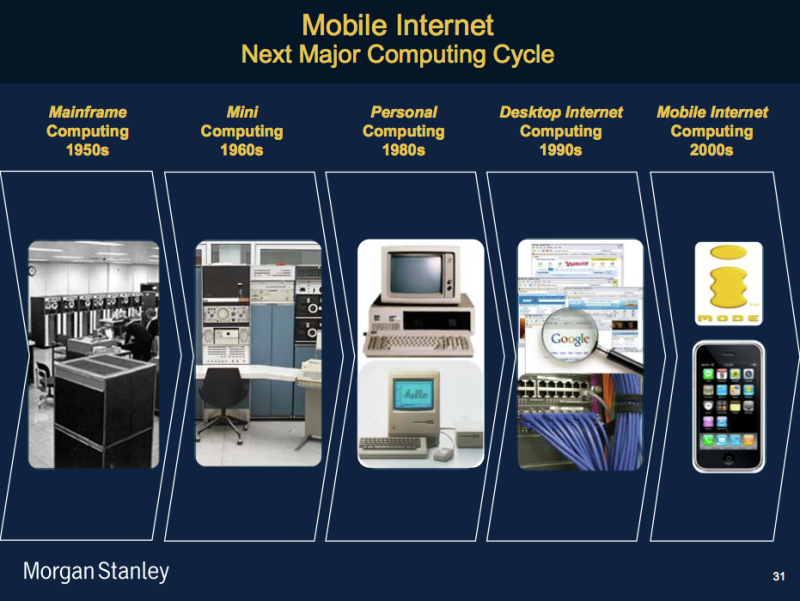 I'm grateful to have experienced such breakneck growth.

During my high school years, I made some fantastic friendships that continue to this day. It continues to amaze me how many high caliber individuals I encountered in one location.

This burgeoning alumni organization promises to provide a rich body of talent and camaraderie to all of it's members.

If you would like to volunteer to help with these tasks, shoot me an email at brian (at) briansoule .com. Let me know how you can contribute to these tasks and I will make you an official part of the organization.

After finishing writing Tip Science; I encountered an entirely new challenge, selling it.

Without doing much research, I set up an account with Google Adwords, and created a sales page. The page did ok without any optimization, but being average is hardly the best strategy.

After researching for a few weeks two resources rose to the forefront, a recorded seminar by the author of Guerrilla Marketing and The book Predictably Irrational by Dan Ariely.

Guerrilla Marketing was written in 1983. In retrospect, most advice on cutting edge marketing I've been given over the years can be traced to that lecture. I will be posting a summary in the near future, so check for it on the blog page.

The book Predictably Irrational follows studies in behavioral economics conducted by MIT's Dan Ariely. A very interesting read, I will be posting a summary on it too.

So how will I change my sales strategies?

I will expand Tip Science from a book to a training course; with a training checklist, progress calendar, forum membership, and a course guide.

The sales page will become a helpful questionnaire, instead of a self promotion.

I will add a second item, priced at 129.95 (more on this tactic with the Predictably Irrational summary)

Stay tuned for the results of these experiments.

You are probably wondering why the institute hasn't been updated as frequently during the last few months. What is Brian Soule working on? Is he on track with his startup company goals? Is he still trying to change the world?

I have been working at Smiley Media. It was started in Silicon Valley by Steve Oskoui, and subsequently relocated to Austin. We grew around 8.8X during the last year, with total annual revenues around 60 million.

I work with millions of dollars worth of traffic, every day; and I look forward to sharing interesting stories, and some of Steve's compelling anecdotes with you.

It boggles my mind how the interconnectedness of today's world is expanding scalability exponentially. Novel industries have historically required global capital for global influence; in this day, an intangible software program can be distributed globally in only a few months. Though the reptilian brain still favors physical strength, the most powerful people on earth are surely mild mannered thinkers. Take a moment to fully appreciate your potential.

What would you do if someone said that you could have a billion dollars, as long as you returned it after a year?

While doing some research of my own, I uncovered another factor that could have accelerated all three elements. It has to do with the fact that from 2003 to 2006, big players could borrow money for virtually nothing.

This is a graph of Real Interest Rates for the last 40 years.

Explanation: (Real Interest Rate = Interest - Inflation) Which means that if you lend your friend $1.00, he may agree to pay you $1.05 in a year. If the value of the dollar falls 5% due to inflation, then that $1.05 will buy less stuff now than your $1.00 could have bought one year ago. Essentially, you paid him a quarter of a cent to borrow your dollar for a year. That is what real interest rate measures.

Now look at the graph. For about a three year period starting before 2003, real interest is below zero. This was essentially a period of free money. Institutions could borrow as much money as they wanted. How is this possible? 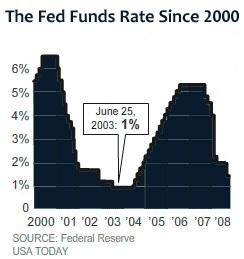 Here is a graph of rates set by the federal reserve. During the same period in the early 2000's. The fed dropped rates dramatically, letting real interest slide below zero and facilitating massive borrowing.

Where was all of this money going? Real Estate. 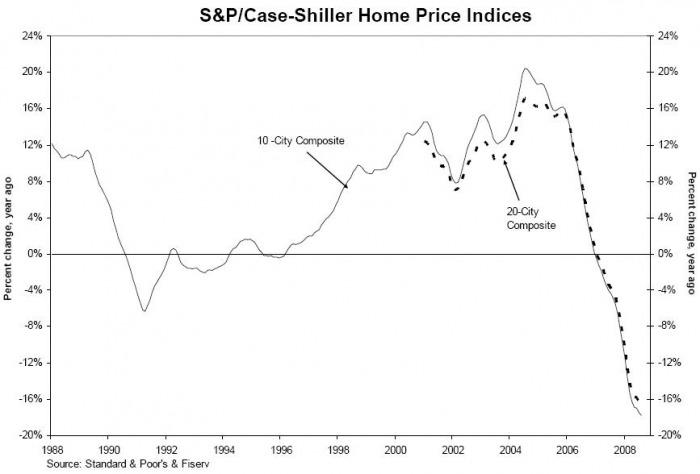 When the fed came to it's senses and raised rates, real interest moved above zero, firms could no longer borrow irresponsible sums of money, investors stopped throwing funds at real estate, and home prices started to plummet; causing a global panic, and a stock market spiral; while taking down commercial banks, AIG, Fannie and Freddie, and all six American investment institutions.

And that is the cost of free money. 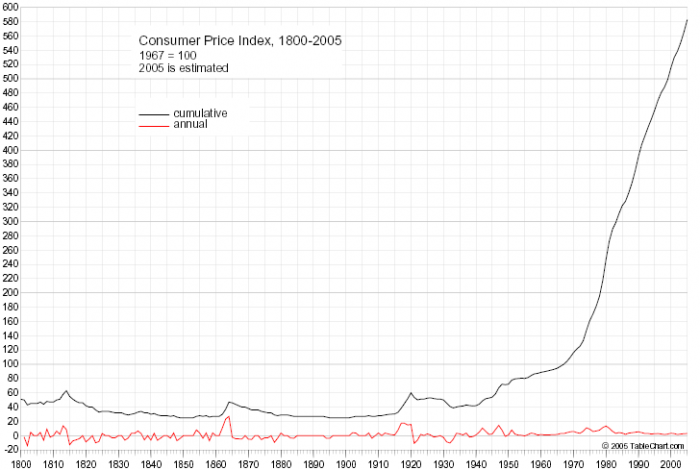 Some say that the bubble had been in the works for much longer than that. Here you can see where Nixon decoupled the US currency from a gold backing. Without this backing, the government was able to print more money than it could pay back. This excess printing increases the quantity of money and therefore decreases its value. This trend is reflected in the consumer price index starting in the 1970s.